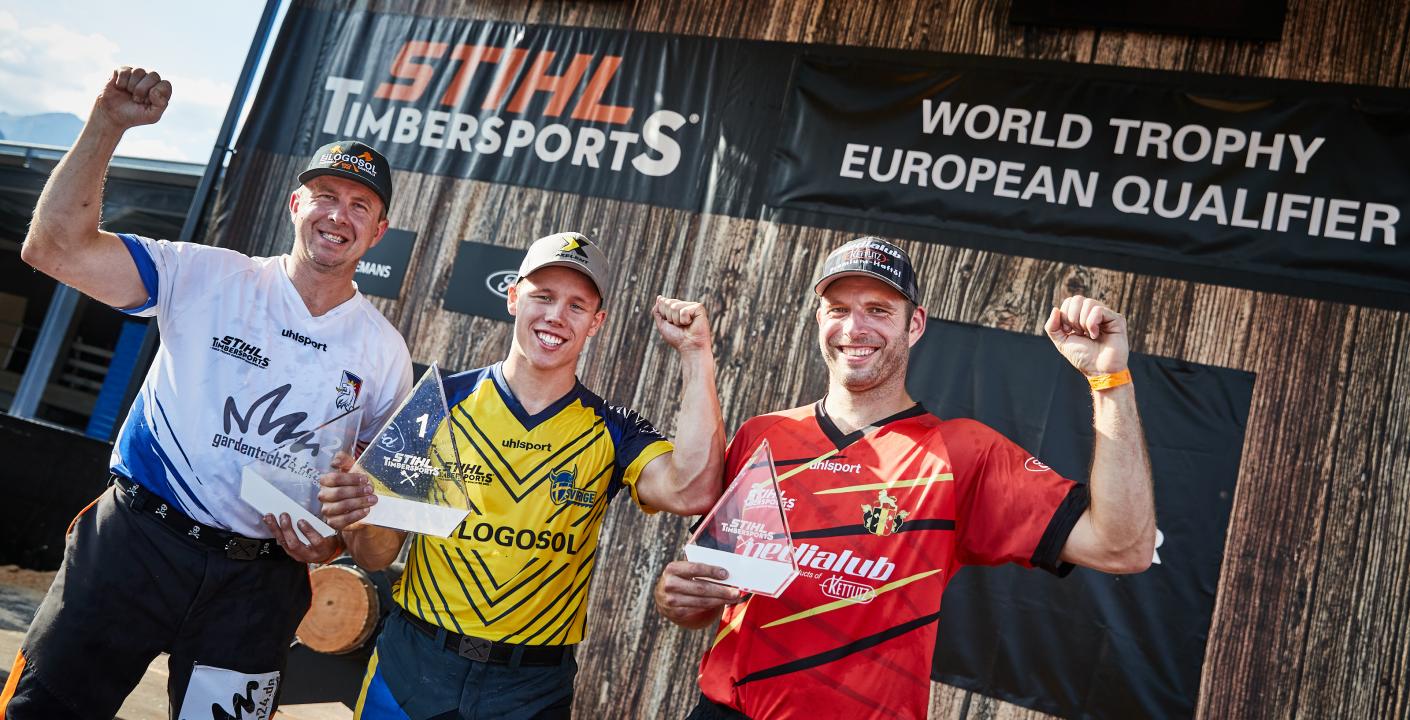 Last Sunday, the World Trophy European Qualifier was held in Switzerland: the qualifying competition where sixteen of Europe’s top athletes competed for six places for the World Trophy 2022. The Nordic representatives were Swedish athletes Ferry Svan and Emil Hansson. Ferry Svan set both Nordic and European records - while defeating the European elite, heat after heat, until he was crowned final winner and best in Europe.

On July 17, it was clear that the Swedish athletes Ferry Svan and Emil Hansson were going to represent the Nordic countries in the next qualifying round for the World Trophy 2022, namely the World Trophy European Qualifier. Last Sunday, sixteen of Europe's top athletes gathered in Aigle, Switzerland, to compete for six qualifying places in the physically demanding and thrilling Trophy format. The athletes must, in the fastest possible time, complete four disciplines in a row - Stock Saw, Single Buck, Underhand Chop and Standing Block Chop.

Ferry Svan won against the titleholder Michal Dubicki in the quarterfinals and at the same time broke a Nordic record. That means he replaced the previous Nordic record set by Swedish Calle Svadling with about 10 seconds. In the semifinals, Ferry Svan challenged the Belgian athlete Koen Marten, where Ferry quickly took the lead and emerged victorious from the duel.

In the final, Ferry competed against none other than the Czech top athlete Martin Komárek. After an extremely even heat, Ferry Svan was announced the final winner, after Komárek was disqualified. Ferry also managed to break the European record with a time of 1:02.36. With a win, a Nordic record, a European record and a place at the World Trophy 2022, Ferry is happy - despite a reluctant start.

– The day did not start well. I was careless and messed up in the time trials. As a result, I had a tough journey through the remaining heat, but I got my focus back and made it to the final. I am very happy with my efforts in the finals, even though it is of course a pity when someone becomes disqualified. My goal was to place among the top six athletes, to secure a place in the World Trophy 2022. To be in the final and win, of course, makes me very happy. Now I will go back home and prepare for the Individual World Championship on October 2, says Ferry.

Emil Hansson finished in a 14th place after giving British athlete Elgan Pugh an even, first duel in the round of 16. Emil also set a personal best with a time of 1:13.86 minutes. Emil, only 20 years old, was the youngest athlete in the qualifying competition and has during 2021 entered the PRO class for the first time. This weekend's international qualifying competition was one of Emil’s first European competitions, who took the bronze medal in the Nordic Championship 2021.

– The time trial went well, then I had some trouble in the first heat with the discipline Single Buck. Overall, I had a good time so I am satisfied. It is fun to compete out in Europe, and to meet and challenge the European athletes. It motivates me. I will continue to train, keep in shape and during the autumn I have some TIMBERSPORTS®-shows to attend as well, says Emil.