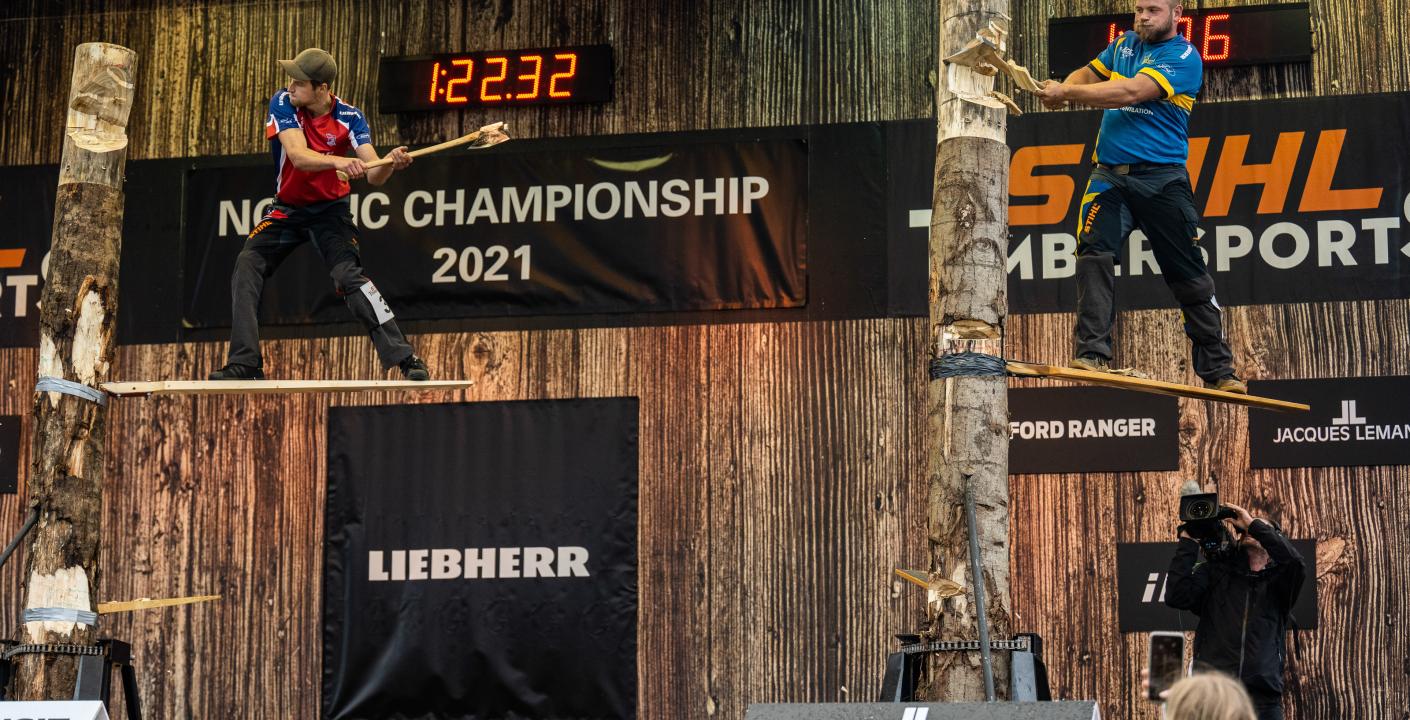 After two years of pandemic and restrictions, the extreme sport TIMBERSPORTS® now presents a full-scale season for 2022. Several international and national competitions await our Nordic athletes. This year's highlight will take place on 28-29 October, in Partille Arena just outside Gothenburg, when Sweden for the very first time will be hosting the TIMBERSPORTS® World Championship.

After two years of pandemic and event restrictions, the extreme sport TIMBERSPORTS® is back in action with a full-scale season for 2022. The sport, in which professional athletes compete with axes and saws in six different disciplines, has become increasingly established in the Nordic countries in recent years. Athletes compete both individually and in teams, in various competition formats from May to October.

This year, for the first time ever, Sweden will be hosting the most prestigious competition, the TIMBERSPORTS®World Championship. From 28-29 October, the world's TIMBERSPORTS ® elite will gather in Partille Arena, just outside Gothenburg, with athletes from Sweden, Norway and the champion countries USA, Australia, and New Zealand, among others.

“It is of course an honour and very exciting that Sweden will be hosting a TIMBERSPORTS® World Championship. It was originally supposed to take place in 2020, but due to the pandemic it was postponed until this year. It is clear that both the Nordic and international athletes have longed for a real world championship and a chance to compete in front of crowded arenas again,” says Emma Birgersson, PR & Communications Manager at STIHL TIMBERSPORTS®.

Both team and individual competitions will be held during the World Championship. As host country, Sweden has secured participation, but which athlete will represent the country will be decided at the end of August, when the Nordic Championship will take place.

More international competitions to come
Until the World Championship weekend in October, Nordic athletes will participate in further competitions. The international season kicks off on 28 May with the World Trophy competition, in which professional athletes Ferry Svan and Emil Hansson will represent Sweden. The Trophy format is tough, with athletes competing two by two in elimination duels, in four challenging events one after the other. The same weekend, the Rookie World Championship will also be held, in which Swedish Rookie athlete Edvin Karlsson will be competing for the World Champion title. Both competitions will be held at Rathausplatz in Vienna, Austria.

Returning partners and new sponsors
Ahead of the exciting season, STIHL TIMBERSPORTS® welcomes both new sponsors and returning partners. Partnerships with LIEBHERR and Ford have been renewed, and the partners thus remain the main international sponsors of the sport. Meanwhile, the German team sports specialist Uhlsport will become a new, international sponsor and official supplier of clothing for STIHL TIMBERSPORTS® and its events until 2023.