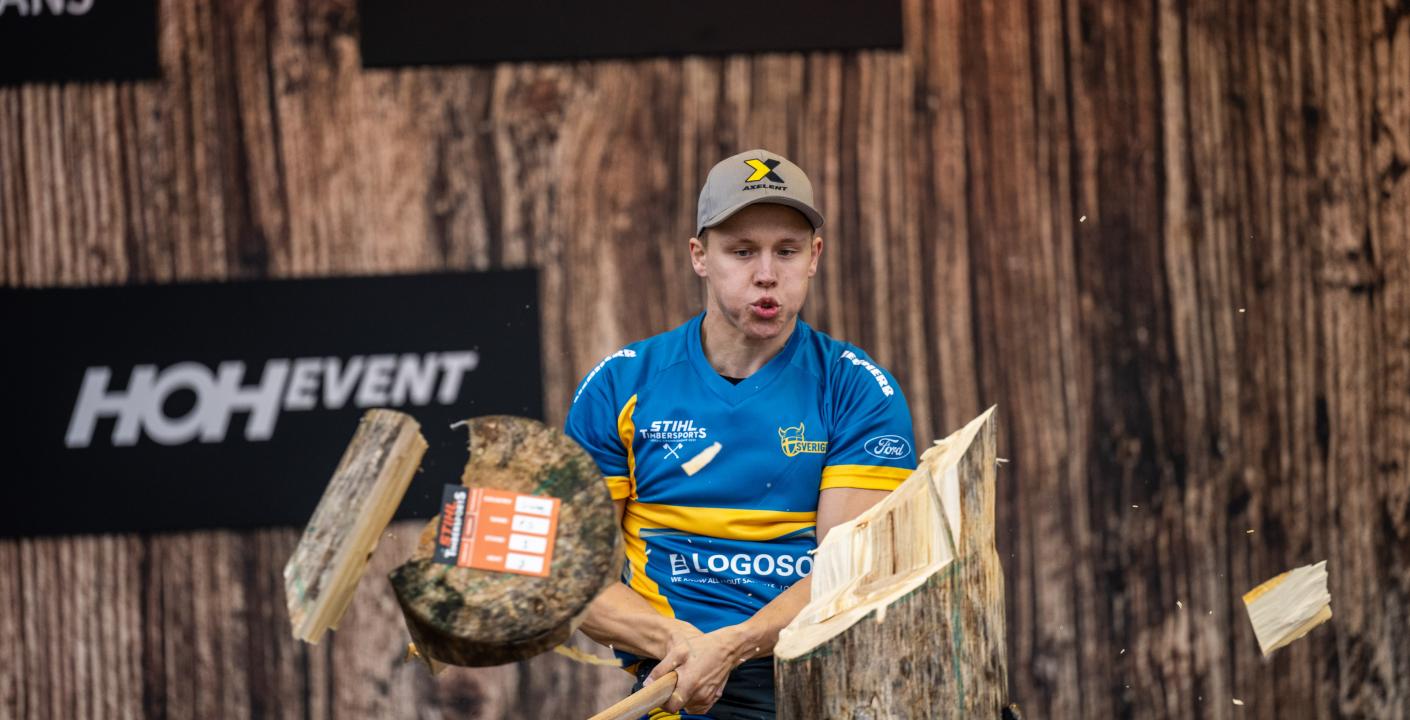 The pinnacle of the TIMBERSPORTS® season will take place on Saturday 2 October, when the 2021 Individual World Championship is held in Munich, Germany. Top athlete Ferry Svan, gold medallist at this year's Nordic Championship and placed second in the European rankings, will be representing the Nordic countries. Ferry will now compete against the international world elite for the World Championship title.

It was clear after the Nordic Championship at the end of August that Ferry Svan would be the athlete representing the Nordic countries in this year's Individual World Championship. Ferry claimed the title of Nordic champion – and also managed to break the Nordic record in the Single Buck discipline.

On Saturday 2 October, the elite of the extreme sports will gather. In total, twelve of the world's top athletes will compete: the national champions from Canada and the USA, as well as the top ten European athletes. Among the participants on 2 October are US champion Jason Lentz, Canadian champion Marcel Dupuis, and Czech champion Martin Komárek – ranked number one in Europe. With the most skilled extreme sports athletes in attendance, the World Championship is expected to bring tough competition, where strength, technique, and focus will determine who takes home the world title.

Ferry, the youngest of the competing athletes, has previously competed in the 2019 Individual World Championship, where he placed seventh. Three years later, Ferry has more achievements to his name – such as Swedish and Nordic Champion, first place in the 2020 Four Nations Cup, and to top it off, ranked number two in Europe.

“I have definitely developed as an athlete since the 2019 World Championship. This was especially evident in the recent World Trophy European Qualifier. I will try to bring the same energy I had there to the World Championship on 2 October. The goal is to make it to the final, and to compete in the Hot Saw – we’ll see what happens. Anything can happen when it comes to Hot Saw since it's worth so many points,” says Ferry.

If the goal is achieved, it will be a historic placement as no other Nordic athlete has ever reached the final round of an Individual World Championship.

In the Individual World Championship, athletes will earn points in all six TIMBERSPORTS® disciplines: with saw in Stock Saw, Single Buck, and Hot Saw, and with axe in Standing Block Chop, Underhand Chop, and Springboard. The disciplines are divided into three rounds in which the lowest scoring athletes will be eliminated after each round. The last round is the finale in Hot Saw, where the heavy chainsaw can weigh up to 30 kilos. With its maximum speed of 250 km/h, the extreme sports athletes will be put to the test, and a podium finish requires high performance.

The Individual World Championship will be held this year without an audience, and TIMBERSPORTS® will be livestreaming the competition via Facebook, Youtube and Twitch. Next year, Sweden will host the 2022 World Championship in Partille Arena just outside Gothenburg.